“Fine-tuning the methods you use is what agriculture is all about, isn’t it?” Dick says.

“I say I don’t really think about these things… but I do. I live and breathe this stuff.”

Dick’s unique feed management system and high performing herd would suggest that he does indeed think – very hard – about the way he structures his farm business, and maize is a key component.

Milking 320 Jersey cows on 100 ha east of Hamilton with wife Faye, Dick started growing maize on farm 20 years ago in order to fill the feed gaps that occasionally arise on farm in the summer.

The couple has a unique feed management system, combining maize grown on farm with bought-in maize silage, and feed the crop as both silage and green feed. 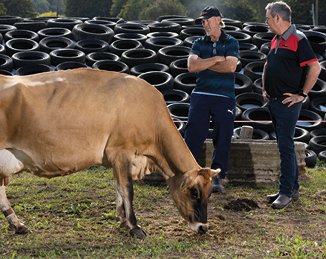 Last season Dick planted 5 ha of maize on farm and additional paddocks on the farm runoff, the crop produced an average yield of 23 tDM/ha. Dick says he harvests around 250 tonnes of maize silage drymatter annually.

On top of his own production, Dick also buys in an additional 100 tonnes of maize silage drymatter.

Depending on climatic conditions, Dick starts harvesting his maize crop in late January and green feeds it as a source of energy to keep his cows lactating.

VPMAXX® Account Manager Barry Smallridge says this practice is not widely adopted however it’s been a consistent means for Dick to achieve results, reflected in both production and bottom-line returns.

“Dick’s production figures would suggest that his management techniques show a sound reason for doing it his way,” he says.

For most of the rest of the season, the herd is fed maize as silage.

“We feed maize from calving onwards, and for most of the milking season,” Dick says.

“We feed a steady, consistent amount of maize as we want as little fluctuation as possible.”

A consistent diet means consistent milk production too with the herds production holding relatively stable throughout the season.

Dick says, “Over the past five seasons the herd has achieved an average of just under 2,000 kgMS/ha annually.”

Feeding maize to support increased fertility is “a big one”, as is holding cow condition.

Dick has been a VPMAXX customer since the company’s inception in 2014 and has worked closely with Barry Smallridge to grow a maize crop that soldiers through the toughest conditions.

“I came past my VP577 maize crop this morning (in January) and it’s just looking a picture,” Dick says.

“The paddocks are dry and we’re doing it tough at the moment, but the maize is hanging in there like nothing else.”

“Barry’s certainly knowledgeable; he has a vast amount of experience, and you can’t beat that.”

“He knows what farmers want.”